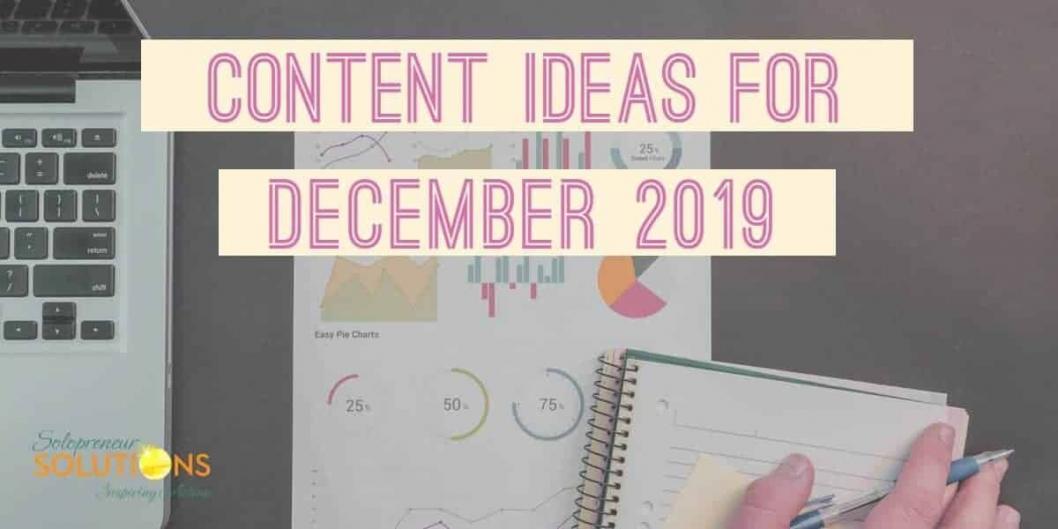 Winter is here and Christmas is just around the corner! The approaching holiday and ending for the year provide many ideas for unique content. Here are my favorite ideas for both.

Promote your own “12 Days of Christmas” by sharing 12 of your most popular products or services over a span of 12 days. Some variations could include:

Lists are always popular content and listed topics always rank high in searches. Consider publishing your retrospective or predictive content in the form of a top 10 listicle. Here are a few ideas.

December 1: Advent
Advent begins four Sundays before Christmas. In the early days of the Christian church, Advent was a time of prayer and confession. Today, Advent is more a time of preparation and expectation of the coming of the Lord. Various symbols are used in celebrations, such as wreaths and candles.

December 21: Winter Solstice
Winter Solstice marks the beginning of winter and is the shortest day of the year. At the North Pole, the sun never rises on this day. For thousands of years, Winter Solstice has celebrated the new solar year. It celebrates the return of the sun, as every day now will see more sun. The sun is at its southernmost point, and now begins its long, six-month journey north.

December 25: Christmas
Christmas is the biggest holiday of the year. Christmas has both a strong religious and traditional meaning. It creates within most a sense of kindness and concern for others. At no other time are we more generous and giving. It creates a sense of family and belonging. Merry Christmas!

December 26: Boxing Day
Boxing Day is celebrated in England, Australia, Canada, New Zealand, and other former British Commonwealth countries. Beginning in the Middle Ages, members of the merchant class would take boxes, fill them with food and fruits, and give them to servants, tradespeople, and the less fortunate. Today, the giving of boxes includes filling boxes with food and clothing for the needy and performing volunteer work.

December 30: Chanukah
Chanukah, the Festival of Lights, (also called Hanukah) celebrates victory from Greek religious persecution. The Jewish victory was led by the Maccabees in the year 167 B.C. Upon returning to the temple to rededicate it and relight the Menorah, the Maccabees found only one small flask of oil, enough to light the Menorah for just one day. However, the flask of oil lasted eight days. This is why it is called the Festival of Lights.

What are your favorite celebrations or events during December? Are there holiday events or happenings that will attract customers or impact your business? How can you use them to promote your company during the busiest shopping month of the year? Share your ideas and suggestions in the comments and of course, share them with your readers!